Macron and the crisis of the managerial elites

"He had a rendezvous with history and failed to show up"

An essay by Philippe Lemoine on the rise and political demise of French President Emmanuel Macron contains these perceptive remarks on the managerial elites that now run France, and, more or less, the other liberal-democratic states of Europe and North America:

“Macron is a product of the French meritocracy. He went to the École Normale d’Administration (ENA), the prestigious school where most high-level French bureaucrats are trained, then upon graduating immediately went on to work in the French administration for a while, before leaving to join a famous private investment bank where he rapidly climbed in the hierarchy and was able to make connections in French business circles that would prove useful later. Énarques, as are called the people who went to the ENA, frequently go back and forth between the administration and large French companies, which typically maintain close ties to the state. Thus Macron spent his entire professional life in this world, at the intersection of public administration and business, which is dominated by technocrats with very similar ideas about how the country should be run.

They support what we might call the neoliberal consensus. Despite what left-wing rhetoric suggests, they are hardly anti-state extremists, nor do they want to eliminate regulations. On the contrary, on some issues, such as the environment, they are strongly in favor of increasing regulations. But they support a moderate reduction in public expenditure, liberalizing the labor market and disengaging the state from production by privatizing state-owned companies. Basically, they are the kind of people who make lazy arguments in favor of free trade by invoking the Kaldor-Hicks criterion like a mantra, without ever pausing to consider the distributional effects of the policies they support.

On foreign policy, neoconservatives and liberal interventionists can always count on them to reflexively support their latest crusade, as long as it’s conducted in the name of human rights and they are being assured that it’s the only way to avert a genocide. When their military adventures create millions of refugees or facilitate the passage of economic migrants by destroying states that, for all their faults, were at least capable of controlling their borders, they explain that we have a moral obligation to welcome these poor people. But you will never hear them acknowledge that it is they, not the people whom they now call racists because they aren’t pleased to live with immigrants whose crime rate is several times higher than average, who created the problem in the first place.

Indeed, as their counterparts in the rest of the West, the French cognoscenti regard immigration from the third world as highly desirable and resent the vast majority of the population for not being sophisticated enough to understand their point of view. It rarely occurs to them that multiculturalism might look very different for the people who can’t afford to dine out in ethnic restaurants and have seen the neighborhood where they grew up changed beyond recognition by immigration. On the contrary, they pride themselves on their openness, though it doesn’t prevent them from using various strategies to make sure their kids don’t go to school with the children of immigrants. Openness is good, but it has its limits.

After 50 years of immigration from the Maghreb and sub-Saharan Africa, the unemployment rate among immigrants and their descendants is still almost three times as high as in the rest of the population.  Their labor force participation is much lower and actually seems to be getting worse in the second generation. Even when they are aware of it (which they usually are not), the French sophisticates are not moved. They just blame racism and insist that eventually things will just get better. How? They have no idea, but don’t you worry, it just will. They don’t seem to realize that, even if they were right that racism is the explanation, it wouldn’t make the problem any less acute unless they have a magical solution to end racism.

In short, although they have a very high opinion of themselves and much contempt for the people who can’t see the wisdom of their policies, the French mandarins are not nearly as smart as they think they are. They like to think of themselves as champions of evidence-based policy thinking, but on many issues, they are actually remarkably insensitive to evidence. Like the communists who insist that real communism has never been tried, if something they support didn’t work in the past, they will always find a way to explain that it doesn’t mean they’re wrong. Perhaps we didn’t go far enough, or we just have to try for a little bit longer, but rest assured that eventually they will be vindicated. Except they usually aren’t.”

For Lemoine, the revolt of the “Yellow Vests” late last year not only torpedoed Macron’s unpopular economic program it also detonated a political crisis, exposing the managerial elite’s want of democratic legitimacy among most French people. It set off a struggle for power between the elites, who have it, and the people, whose opinions they largely despise.

“Although initially the yellow vests movement focused on taxes and the cost of living, the protesters soon started to formulate demands that went far beyond that. In particular, many of them complained about a lack of democracy, a concern they share with the vast majority of the population. According to the latest wave of a survey about political attitudes conducted on a regular basis, 70 percent of the people think that democracy doesn’t work at all or not very well in France. Moreover, this is not something that started with Macron, this figure has been consistently high and trending up for more than a decade. A whopping 85 percent think that political leaders care little or not at all about their opinion. Of course, they are right about that, for political leaders couldn’t care less about what they think, except insofar as they want to get reelected.

In fact, it’s not just that political leaders don’t care about their opinion, it’s that they 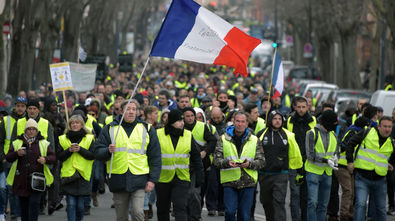 despise it and think it’s dangerous. This is why they increasingly seek to shield the decision-making process from democratic control by various means. The European Union, in which decision makers are far removed from the population to which their decisions apply, is how they achieve that in the realm of economic policy. They do the same thing with immigration by signing treaties on human rights, which are then interpreted extensively by courts, without any kind of democratic control. Independent agencies are set up, filled with experts appointed by the government or even sometimes by other independent bodies, to devise rules that apply to everyone, even though neither the rules themselves nor the composition of those agencies were ever the object of a public debate. People must be protected against themselves by institutions that ensure the decisions will be made by those who know better. In the name of this paternalist conception of politics, democracy is slowly emptied of its substance, as the people have less and less influence on the way they are governed.

In order to address this problem, some of the yellow vests proposed to introduce a mechanism of direct democracy, modeled after the popular initiative system in Switzerland. This would allow a sufficient number of citizens to launch a referendum to vote a law or change the Constitution, which at the moment can only be done by the president. In France, a referendum was organized for the last time in 2005, to decide whether the treaty establishing a constitution for Europe should be ratified. It was rejected by almost 55 percent of the voters, but it didn’t prevent the parliament from approving the treaty of Lisbon in 2008, which was almost identical….After that no government wanted to take the risk of being rebuffed again.

This proposal sent the sophisticates into a frenzy. Pundits spent the past few weeks explaining that, should such a mechanism of direct democracy be introduced in France, chaos would immediately ensue. This is not the place to refute the dishonest, nonsensical arguments they have used against this proposal, but what needs to be noted here is that it revealed that 1) the elites have a perception of the people that is completely detached from reality and 2) they are convinced that most of the policies they support would never be approved by a majority of the people….

Of course, they are right that, in many cases, the people would reject their policies, but they don’t seem to think it’s a problem if a small minority governs against the wishes of the vast majority of the people. In fact, not only do they not think it’s a problem, but they clearly think it’s how things should work, provided they take the minority in question to be sufficiently enlightened. Many people are in favor of some kind of epistocracy and I personally think it’s a respectable opinion, even though I also think the arguments used to support it are embarrassingly bad, but if that is what the elites support they should be open about it. Instead they pretend to be democrats and accuse people who refuse that a small minority of people govern against the wishes of the majority of undermining democracy…

With this crisis, Macron had the opportunity to strike a historical bargain. He could have agreed to give back some power to the people, allow them to take back a measure of control over some of the issues that have been captured by the elites for decades, in exchange for which they may have been more willing to go along with some of the things he would like to do. But this would have required that he be able to compromise and that he go against the class who put him where he is now, both things he is clearly incapable or unwilling to do except at the margins. The way in which Macron dealt with the yellow vests crisis shows that he is nothing but a mediocre technocrat incapable of rising above his condition and that he never will be anything more. He had a rendezvous with history and failed to show up.”